The BWSD community mourns the loss of beloved teacher David Spahr. Though he was 81 years old, he only recently retired from teaching. In October of 2017, Spahr retired after spending 55 years as a high school chemistry, physics, and math teacher at Baldwin High School. His wife, Deloris set up a scholarship fund in his honor that will be awarded to an outstanding student in physics.

District Superintendent Dr. Randal Lutz shared, "There's a phrase that speaks to setting your goals high and then exceeding them. That's the type of legacy and impact Dave Spahr leaves with countless students and colleagues within the Baldwin High School community after 54 years of teaching. Students who were able to rise to David Spahr's standards and meet his incredibly high level of academic rigor were able to compete at the highest levels as they transitioned into science courses at the higher education level and beyond. Generations of professionals in the sciences look back and point to Dave Spahr at the person who inspired them and provided the foundation needed to both achieve and excel. He will be dearly missed but his influence will live on infinitely." 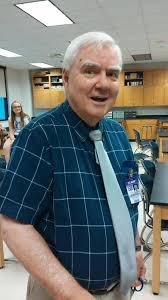