The history of the Baldwin-Whitehall School District has been filled with diversity, hard-working citizens, and community pride for over 300 years. It began before the 18th century with the Lenape and Delaware Indians, who inhabited the Baldwin area until Scotch-Irish and German immigrants began to settle into the 19th century. They were attracted to the area’s fruitful land grants, plentiful coal mines, and valuable farm land. They felt at home, as the area’s hills and forests resembled their countries back home.

In 1844, due to this flood of immigrants, James Baldwin founded Baldwin Township to create a sense of community pride in their hard work and common aspirations. Fostering an educational system that reflected their goals now became a necessity. Until the end of the 1800s, the only school systems were one-room schoolhouses run by nuns in local churches. Into the early 1900s, school buildings grew and became more public, with Baldwin Township, Carrick, Brentwood, Castle Shannon, and Bethel Park Boroughs sharing elementary and middle schools. Carrick and Brentwood High Schools existed for students who wanted to continue their education past middle school.

In the 1930s, as the area grew and the population began to rise, Baldwin decided that their own high school was becoming a necessity. They greatly valued education and wanted to create the best environment for their students in inventive, creative ways, including a simulated farm for agriculture class. They opened in the fall of 1939 with 655 students in ninth and tenth grade and the first class graduated in 1941. The Fighting Highlander, chosen to pay tribute to the Scottish settlers of the Baldwin area, became the mascot for activities and athletics as early as the 1940s and has continued to the present day.

No matter the decade, the district remains true to the original settlers of the Baldwin area, who prided themselves as a hard-working, tight-knit, diverse people who adapted to their environments and truly evolved as pioneers of their community and their beliefs. We as a district truly are one! 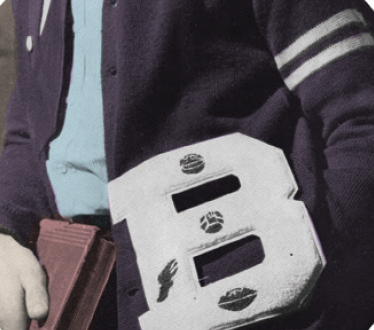